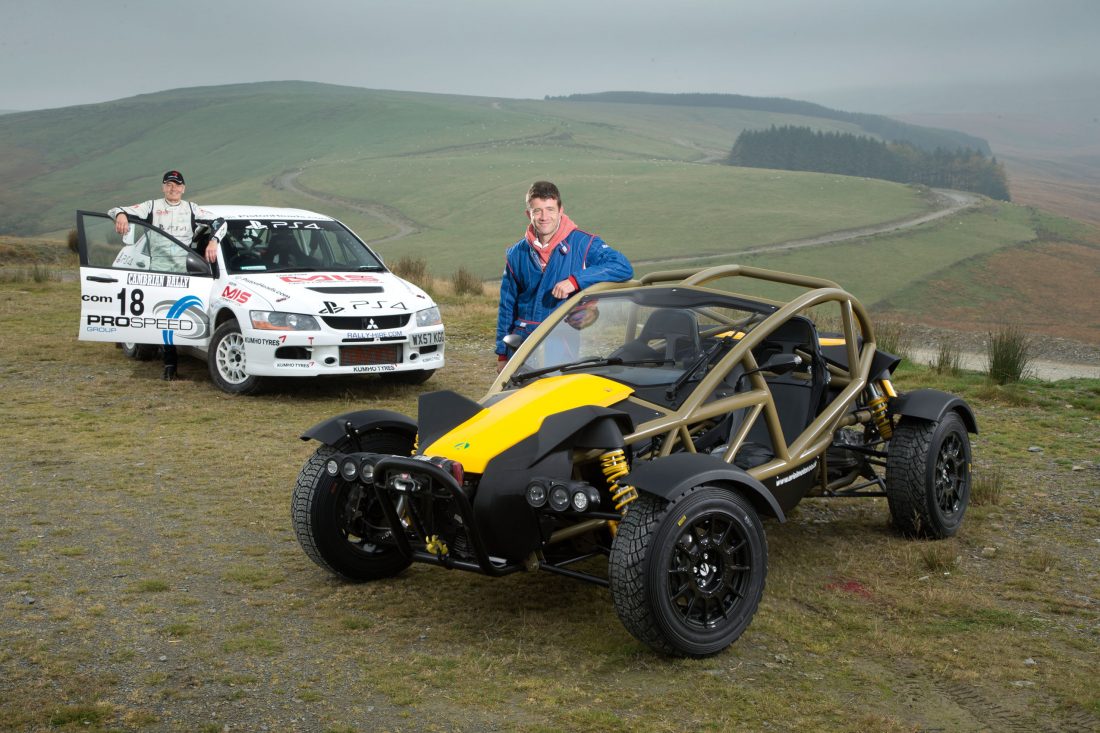 Can the Ariel Nomad really be as quick on a gravel stage as a Group N rally car? Two expert drivers join us at Sweet Lamb in Wales to find out.

I’d like to claim the idea for myself, but it came from an aside in a conversation about something else entirely with Ariel boss Simon Saunders. He mentioned in passing that while they were testing their Nomad, someone had casually timed its progress over a stage and thought its pace similar to that of a Group N rally car.

Had I not known Saunders for many years, I’d have dismissed it as puff, the kind of comment we hear quite a lot: a big, improbable claim couched in terms broad enough to offer plausible deniability should anyone ever put it to the test, which of course they never would. Except that’s not his style.

But could a rear-wheel-drive road car with a normally aspirated 2.4-litre Honda motor really keep pace with a purpose-built, four-wheel-drive turbocharged rally car complete with anti-lag, an electronically programmable centre diff and the kind of suspension that could make the surface of the moon feel like the M4 motorway?

At times like this, it helps to look at it from the other perspective, and we needed a Group N car to do it. To the rescue: well-known motorsport pundit Tony Jardine, who has been a rally driver for 40 years and will in two weeks’ time take part in his 20th Rally GB, when he will be driving a Rally Hire Group N 2007 Mitsubishi Evo IX.

This is the same car in which, two years ago, aged 61, Jardine won his class in Wales Rally GB, navigated not by some seasoned pro but Olympic gold medal-winning skeleton bob racer Amy Williams.

And it’s true that the Evo does have a lot of tricks under its standard skin but so, too, does it weigh almost 1400kg – not far off double the weight of the Nomad, even with the Ariel in full off-road configuration. And because of the Group N regulations, the Evo’s engine is not a 400bhp flame-thrower, but a standard road motor (save, I believe, toughened big-end bolts) breathing through a 33mm restrictor, limiting power to around 240bhp, far less than a bog-standard showroom Evo IX and a paltry 5bhp more than the Nomad. Would a power-to-weight ratio barely half that of its opponent not prove an impediment too great even for a proper rally car to overcome?

The truth is, we didn’t know, so we headed to the Sweet Lamb Rally Complex in mid-Wales to find out. 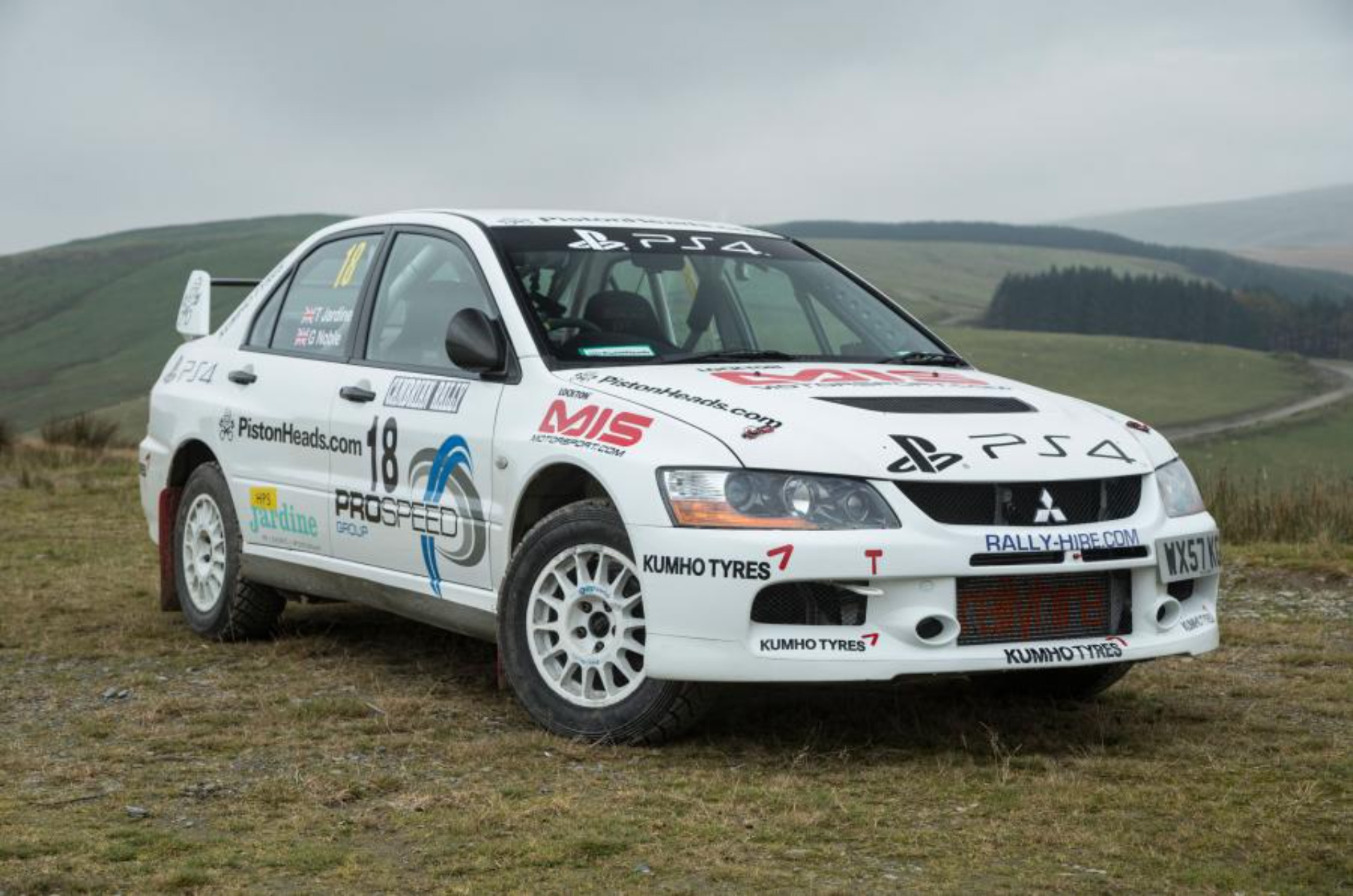 You may never have heard of this place, but as a venue to go and giggle yourself senseless driving fast, it beats the old Nürburgring hands down. It has 25 miles of gravel stages, including every kind of hump, jump, kink, corner, twist and turn the most fertile imagination could conjure. And if you’re not sideways in every one of them, you’re not doing it right.

The contest was simple: each team would field its own driver, Jardine in the Evo and Simon Clark behind the wheel of the Nomad. Clark, 38, has done all the development work on the Nomad, knows Sweet Lamb like the road outside his house and is surely one of rallying’s great unknown talents, as the on-board footage will ably illustrate once posted on our website.

We chose a fast, two-mile stage and invited the drivers to do their best. Both cars wore purpose-built but road-legal gravel tyres and could do as many laps as they chose. I’d man the stopwatch.

The Nomad went first, twitching and snorting its way up the hill, Clark firing gear after gear at it, searching for some traction. As the car disappeared over the brow, we could hear its staccato voice echoing around Sweet Lamb with every stab of the throttle.

Then he was back with us, running fast downhill, clearly airborne in many places, before slithering past, inside front wheel waving in the air, and rocketing away again. It was an awesome spectacle and produced a 1min 35.9sec lap, which he reduced to 1:33.4 two laps later. How close would Jardine get?

It didn’t take long to find out. Driving like he had a rear-drive Ford Mk2 Escort under his feet rather than a modern, four-wheel-drive Group N car, Jardine flung the Evo at the scenery, anti-lag popping like salvoes of machine gun fire. It looked slower, but it wasn’t. He took just two laps to blitz the Nomad’s time and, on the third, did 1:30.4, fully three seconds faster than Clark.

Where was the Nomad going to find that kind of time? While the Evo had a minor electrical issue fixed, the Ariel boys went to look for it. They came back, having slackened off the rear dampers and dropped the tyre pressures. Whereupon Ariel’s Henry Siebert-Saunders, whose baby the Nomad is, told Clark to set aside his understandable concerns about damaging the car, “get back in and drive faster”. Which he duly did. Much, much faster, in fact.

His first flying lap was the first of the day to go under 1min 30sec, and two laps later he did a barely believable 1:28.4, phlegmatically explaining that he’d found some more traction and got some heat into the tyres. But to those of us looking on, he seemed not so much on the edge as having a proper peek over the other side.

On receipt of this news, Jardine simply murmured, “Got some work to do”, strapped himself back into the Evo and drove it, to use his words, “as fast as I jolly well can”. Except he didn’t say ‘jolly’. 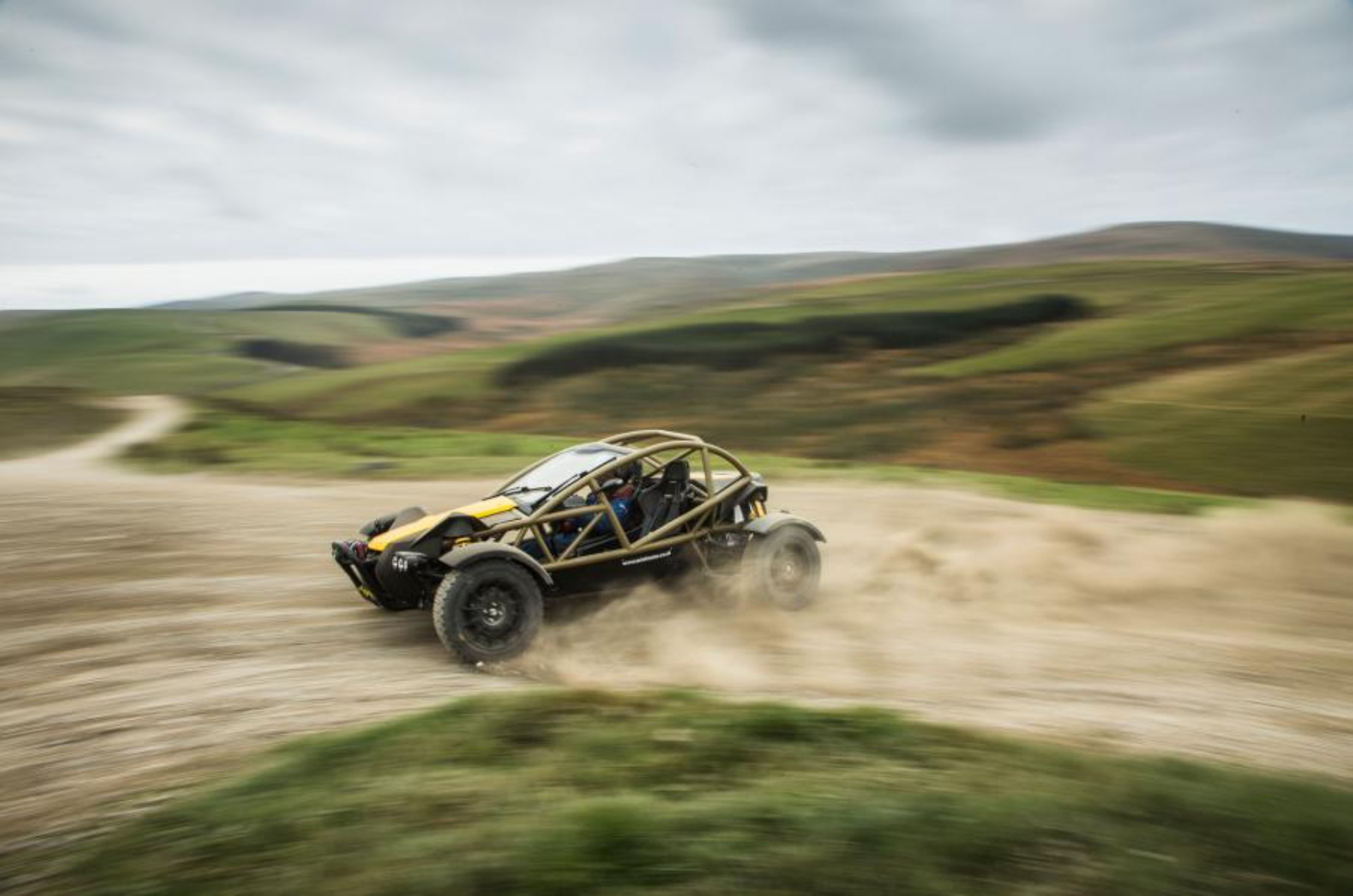 Finding reserves in himself and the car I didn’t know existed, Jardine took half a second out of the Nomad on his second flying lap and a bit more even than that on the next.  He ended up with a 1:27.3 lap,  1.1sec faster than an Ariel being driven as fast as apparently possible on the facility upon which it was developed by the bloke who did all the developing. Surely that was it, and to come so close to a proper rally car was a triumph in its own right.

Then, understandably unwilling to expose it to further wear and risk so close to Wales Rally GB, Jardine closed the Evo’s account. Ariel, however, had no such constraints and sent Clark out again. Those last three laps will live in my mind for a very long time. His first was 1:27.8, his second 1:27.4, one scant tenth off the Evo.

It is fair to say that now there were a few people hanging around on that hillside with concerned expressions on their face, none because they were any more worried about who’d come out on top.

And then one last lap – the one on which Clark later admitted to leaving his brain behind. It seems silly to sit here and write this, but the car seemed to be going visibly quicker, more punctuated than ever by periods when you’d hear the revs go off the clock simply because the car was no longer connected to the ground. Our hearts were pumping hard just watching, so God knows what it must have been like inside. And when I looked at the stopwatch, I thought I must have pressed the button at the wrong time. It said 1:25.8. So I consulted the two others also timing the run, both part of the Rally Hire team. Their watches said the same.

So the Nomad beat the Evo IX by 1.5sec. Would Jardine have gone faster still had he done the same number of laps? It is impossible to know but, to me, it’s also hardly the point: we went to Sweet Lamb simply to find out if a Nomad really could stay with the pace of a purpose-built rally car. And the answer is that it can. 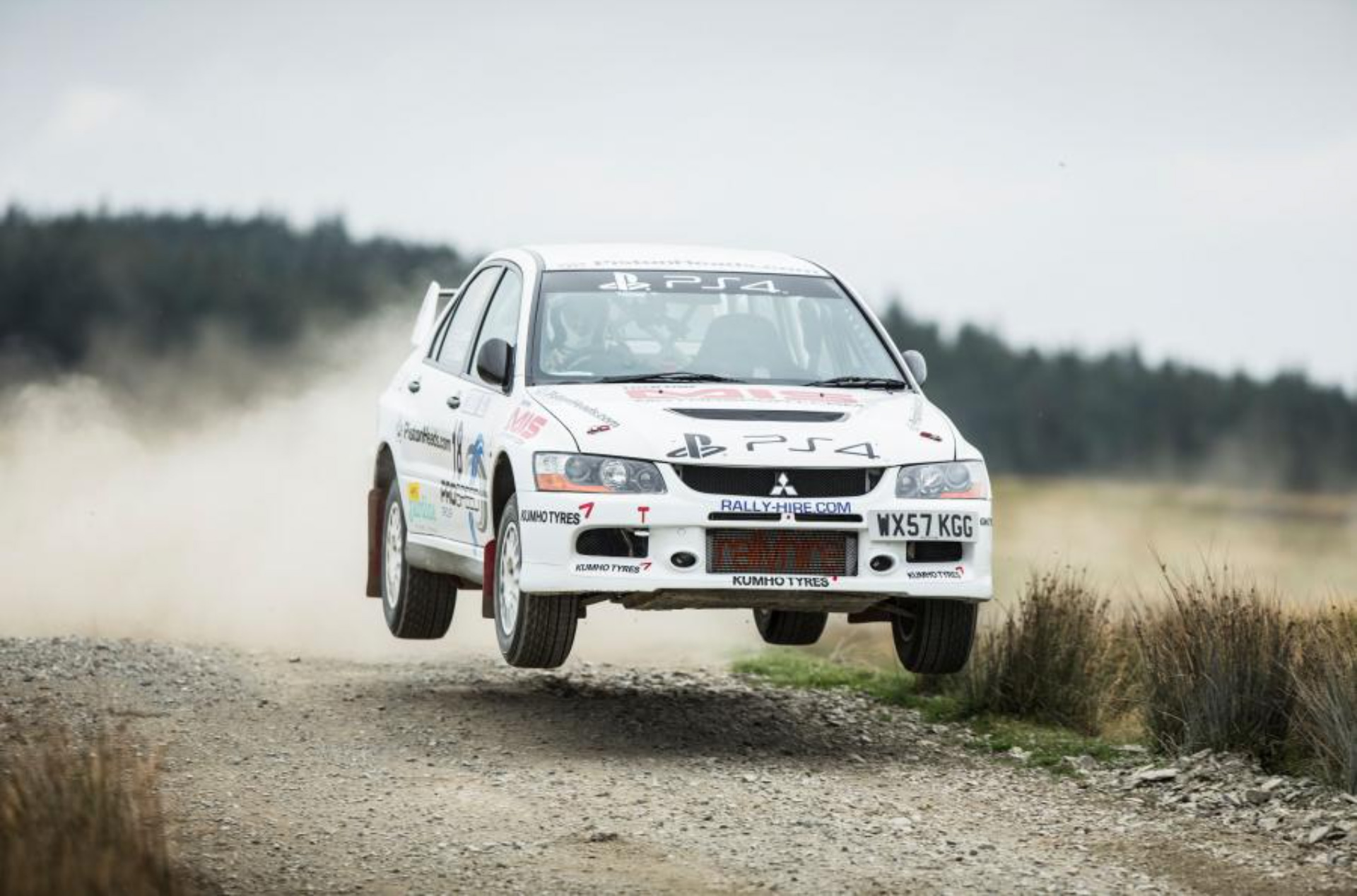 Our turn behind the wheel

The rally car offers by far the more familiar driving environment. You have a standard dashboard, conventional driving position and even the original electric windows. It feels pleasantly rapid off the line and accelerates uphill on gravel as if it were on dry asphalt.

“Let the car do the work” is Tony Jardine’s advice, so when the tail slides wide on entry, I don’t fight it but use the steering just enough to keep pace with it, applying the power to maintain the slide. Like this, the amount of grip it can conjure on this surface is simply absurd. And yes, driven like this in fourth gear on the loose, it is every bit as much fun as it sounds. Even at quite dramatic angles, it never feels frightening, never feels like it might get away from you. From start to finish, it’s on your side, your flexible friend accommodating your every request, however outrageous it may me. Above all, it inspires confidence, because that’s what makes rally cars go fast.

I don’t trust the Nomad at all on the first lap. In fact, it appears to be trying to kill me, with as much violent understeer followed by snap oversteer as I can quite uncomfortably cope with. But on lap two, it feels like a different car. It hadn’t occurred to me that the tyres would need time to get up to temperature on the loose, but I have no better explanation. Thereafter, the ride is wild but no longer suicidal. Despite its weight advantage, it’s harder to get into the apex than the Evo, but when the nose does bite and the back breaks loose, there’s as much fun to be had as you can handle.

So the Nomad asks a lot more of its driver, but for that reason it provides a greater sense of achievement when you bring it back in the right number of pieces. For myself, I think I’d rather spend a day at Sweet Lamb in the Evo, because it would be far more likely to have a happy ending. But one more lap? It would have to be in the Nomad.