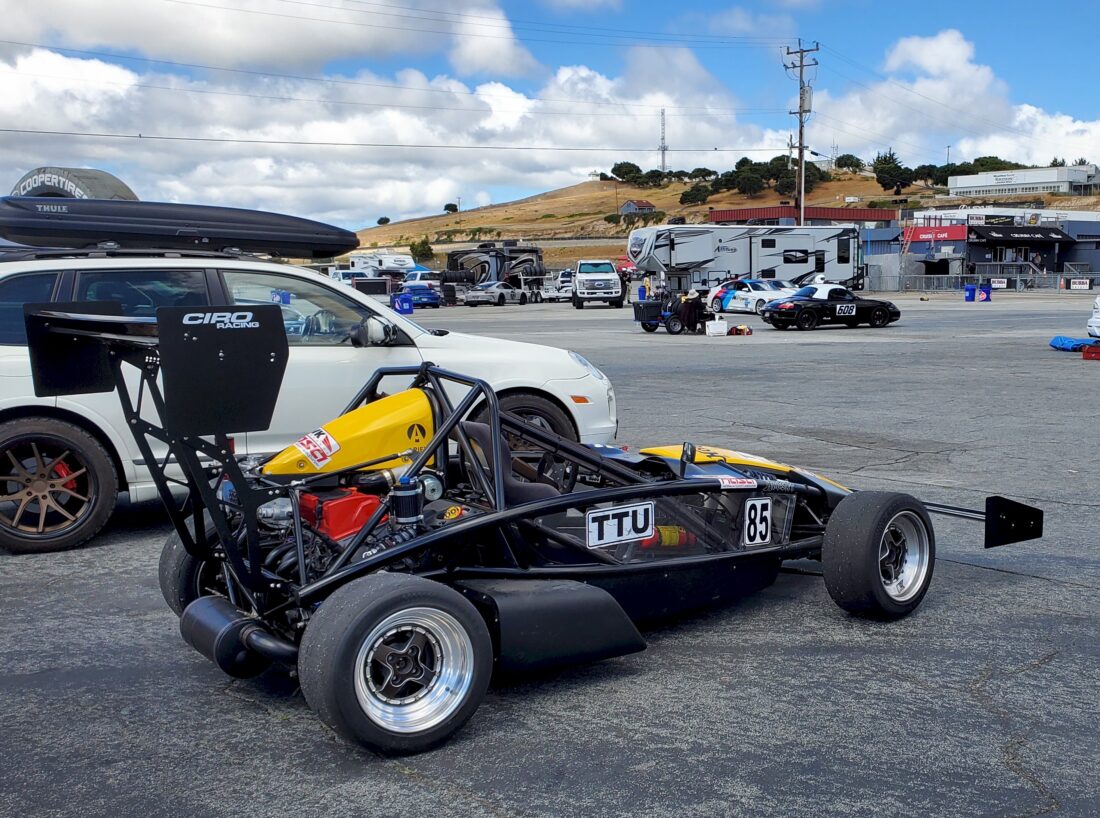 The goal is to be as fun and as raw as possible to drive. It goes without saying that another goal is to go faster but good reliability remains a major condition.

End of 2019 season: in the first round of modifications I swapped in an HPD engine. The K24/K20 engine nets a 58whp increase while running much cooler. The head is stock 8th gen USDM Civic K20Z3, which should last forever with a redline lower than in the street car. This engine replaces the weakest link in the stock USDM K24Z7 block, the cast pistons with weak ring lands, in favor of custom forged Mahle pieces. Though compression is a stock 11:1 the engine is tuned on 105 RON octane. Every track in Northern California has 105 RON octane so might as well take advantage of it.

The car is used on track only. The intake design bypasses the stock snorkel which has been shown by others to be a major restriction. This opens up the intake snorkel use for other purposes, such as an air-to-air charge cooler.

The exhaust mounts the muffler lower to the ground to lower COG and opens up the engine bay for an Accusump. I tested a triple pass Dynomax muffler of this size at Laguna Seca and it passes the diabolical 90db @ 60ft sound limit. The engine mod alone yielded ~3 second a lap improvement at Thunderhill East and Sonoma raceways.

The goal for 2020 is to add forced induction via a Rotrex C38R, hence many of the design parameters used in making the intake and exhaust where set for 450hp crank in a centrifugal application etc. Dyno stock rated 230hp crank tested 190whp. HPD motor rated !secret! tested 248whp equivalent of 300 crank hp if 230hp stock rating is true! 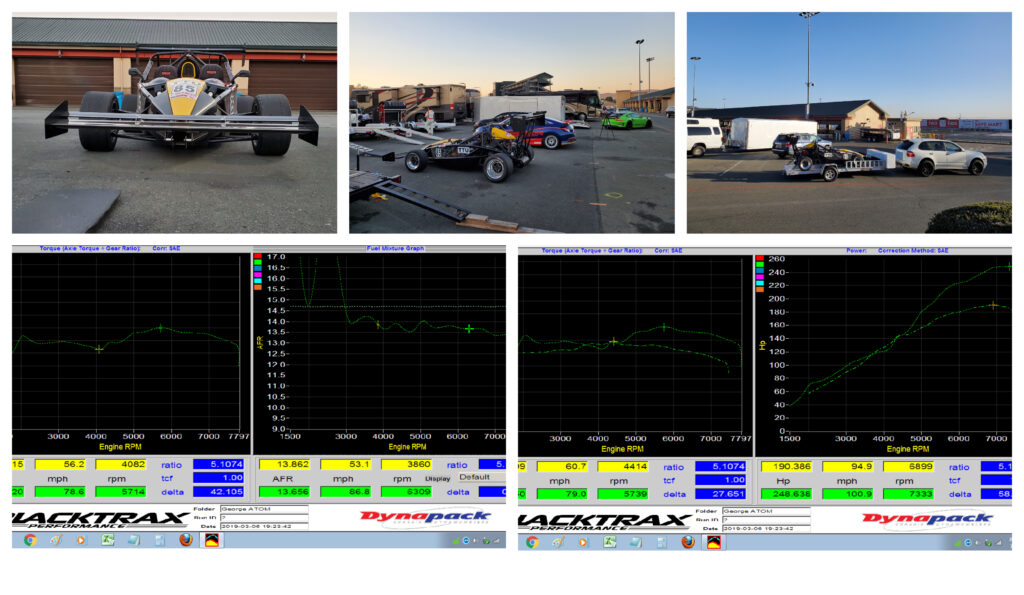 First up is the oil cooler. It took a lot of digging to sort out this solution. The V8 side pods are different than the 3.5R side pods which are again different from the 3S/3RS side pods. In the end, the 3.5R side pod solution was the one to go for. It houses an oil cooler on the passenger side as does the V8, but without the associated dry sump bits that fill the side pod. The 3S/3RS have a water cooler there. After giving it some thought I decided I do not want the dry sump tank to be in the sidepod, instead I’m going for a dry sump tank that is very tall for better air/oil separation and large capacity. With this cooler I free up the SRA inboard mounted heat exchanger to be removed or used in a different application. 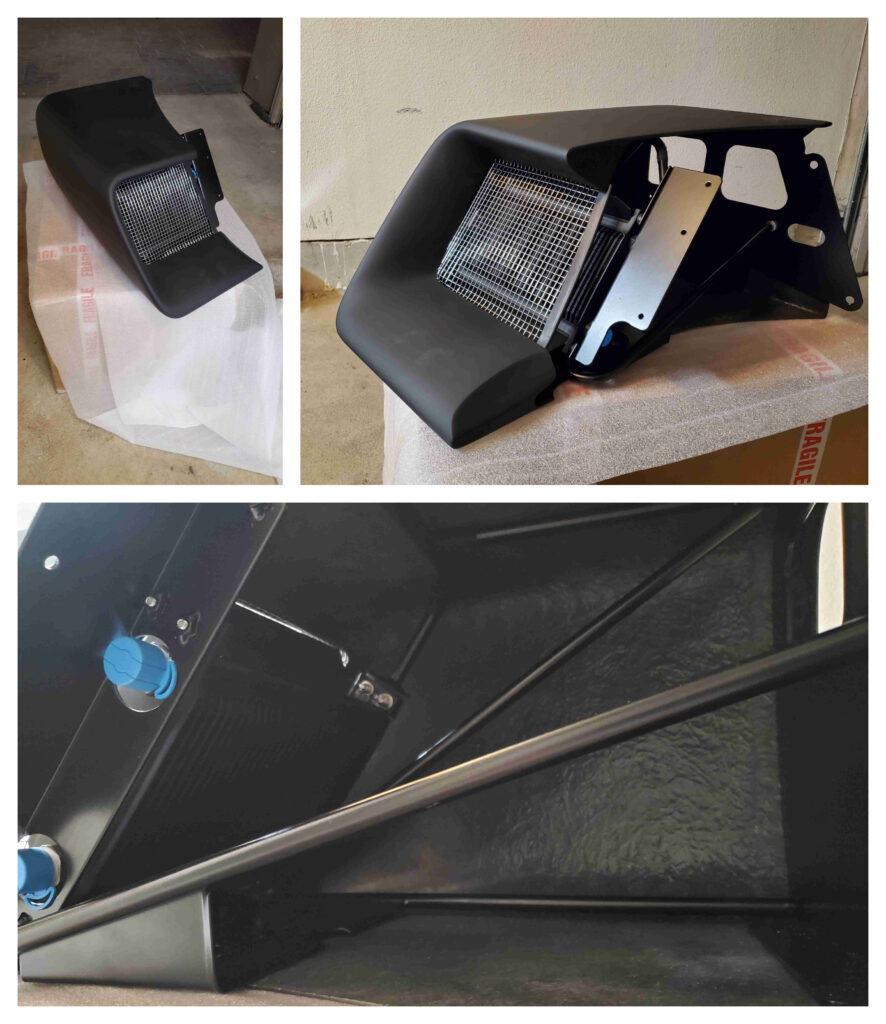 The sidepod has always been the final solution for me. I figure the inflow and outflow are great, and can surpass the SRA fan solution above 50mph. I average about 80mph on track. There is lots of room in the pod but I’ll try to keep it empty to maximize airflow through the core. Core thickness is 2″ which IMO is the point where diminishing returns to increasing core size set in, even for front mounted heat exchangers.

Worst case scenario I will still need extra cooling capacity, then I’ll add the existing SRA oil cooler inline as an auxiliary. For now I’m going with just this one to maximize oil pressure.

The water cooling side of things gets interesting. Since I opted for the oil cooler on the passenger side pod the only option on the driver side pod was a water to air heat exchanger for the blower/turbo. This is true of either 3.5R or 3S/3RS. For many reasons I’m opting for air to air charge cooling which means the driver’s side heat exchanger has to be something else. Besides, I’ll need lots of engine water cooling to run for up to 25 minutes continuous in 40C+ weather. To conclude, the driver’s side pod has to be a second water radiator for the engine. I decided to re-purpose the supercharger charge cooler as a secondary radiator. 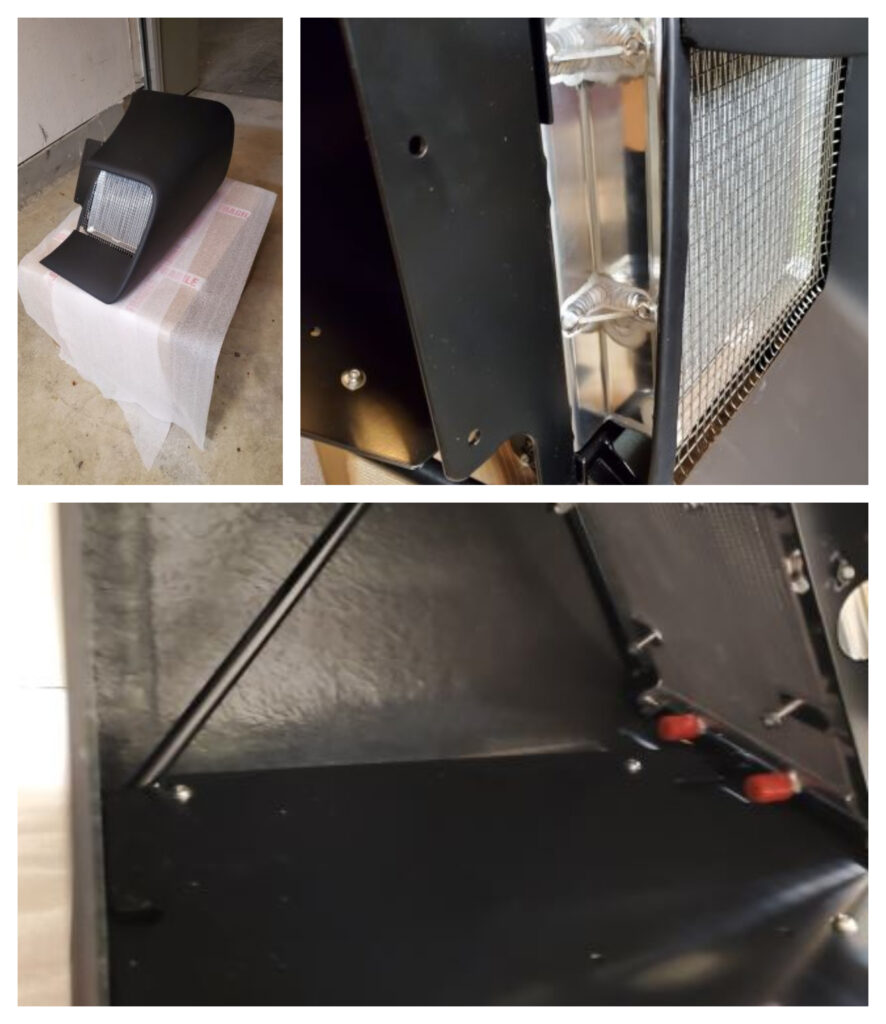 The small inlet/outlet size dictates parallel connection in the water system so as to not limit water flow rate. The factory pod and heat exchanger is extremely well built. The core is thick with some very nice baffling and strengthening ribs.

The new Rotrex C38R is here. I’ve wanted a Rotrex Honda powerplant for something like 20 years. I experienced a Rotrex C30 in a Honda S2000 and it was intoxicating. It built up power like an exotic high revving engine and didn’t whine like some of the other supercharger solutions. In the Atom it helps that it has a very tiny footprint for the amount of boost it can generate. Another owner has already taken his K22 build to over 21psi and is far from reaching the peak impeller shaft speed. 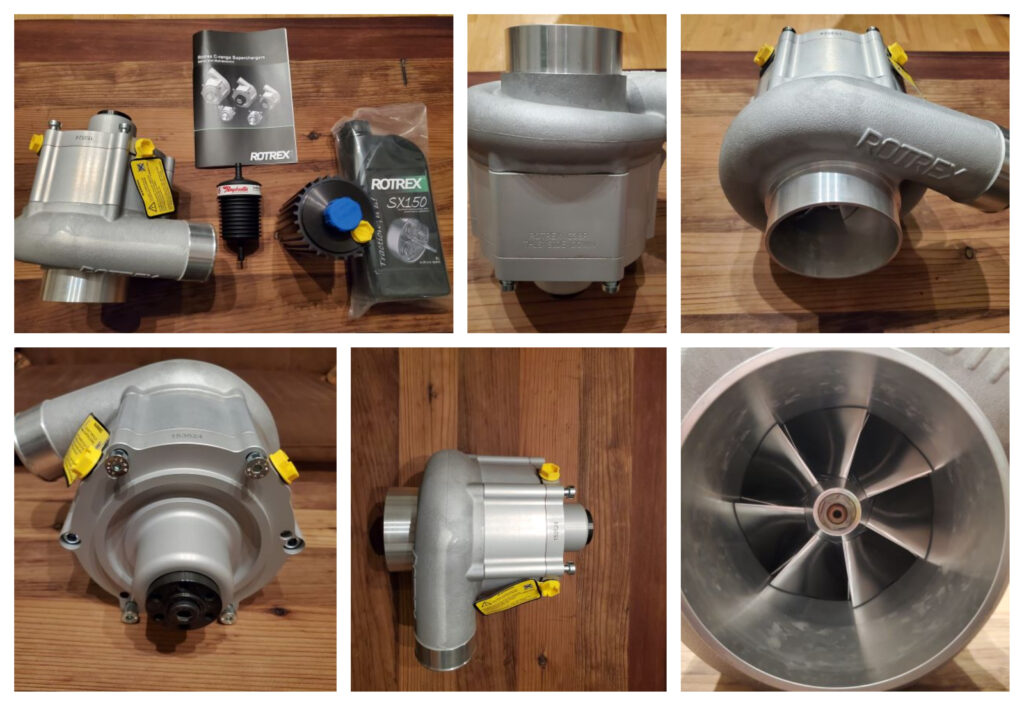 83mm inlet ID, 53mm outlet ID. I have a custom-built Jim Wolf pop charger built for matching the 83mm inlet. On the outlet side the TTS air to air intercooler is 2″ OD which is a bit small. Planning to run it very conservatively at only 78.6% of its max speed in the first year.

Eventually I’ll have to rebuild the engine, and then I’ll go for low compression pistons and uncork the Rotrex to the tune of 500whp @ 24psi.

I’ll be shocked if it all runs perfectly on the first outing. We don’t really know what the K24Z7 rods can hold since no one pushed them with forged pistons, and hardly anyone tried the new Rotrex C38R.

This was not an easy choice, the OEM solution is well thought out, the TTS air to air solution is proven with turbo and Rotrex, I even had the choice of full custom.

In the end I decided that for road course use the air to air solution is hard to beat. In time trials I never start from a stop since there is a warm-up lap. Given the airflow, going water to air seemed like adding too much weight and complexity for the same outcome.

There is no readymade solution to use the airbox for anything other than a ram air intake or an air to air intercooler. As with ram air, I’m guessing, the gains are 0.005 bar at most Atom speeds, so it is hardly seems worth the trouble. A custom water to air solution in the intake box location is a bit too high for center of gravity (COG) considerations. A light air-to-air heat exchanger mounted high is hardly a COG penalty, plus it always gets cold air and airflow. This means both sidepods can be used for engine oil and water cooling which I’m guessing will be the primary power output limitation in Californian heat.

The final thought was that if I’m willing to add some drag I can always mount a higher custom air to air core above the engine to increase boost pressure and reduce charge air temps. 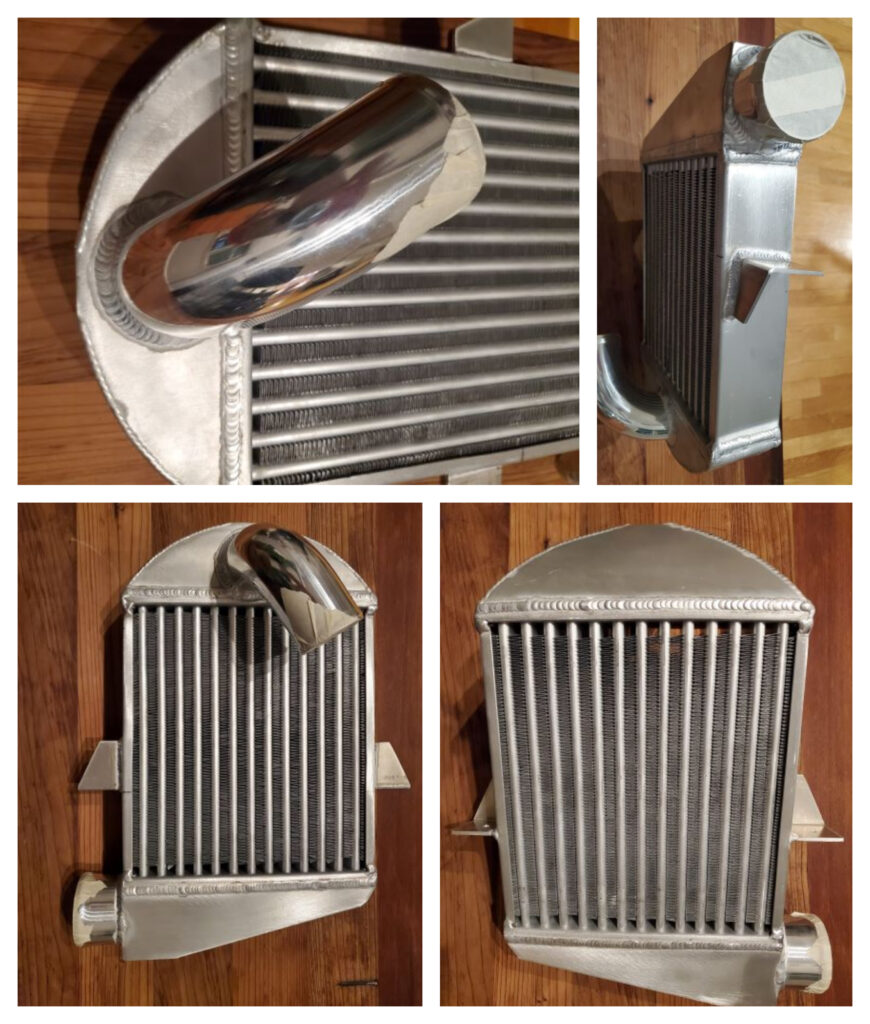 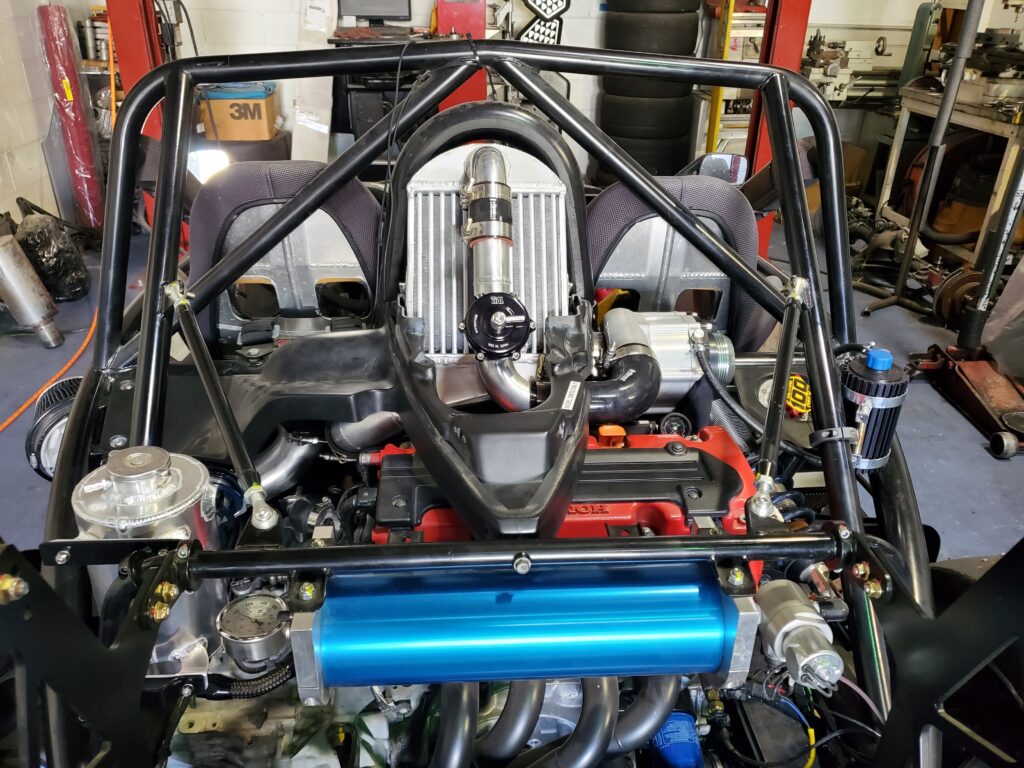 Question: You do still run the intake cover with that intercooler?

Answer: Yes. The cover picture of the car shows the yellow air cover in place.

We have a tune! The shop finished tuning it, I was a bit surprised how conservative they went but that’s fine by me. We still got a 400hp crank motor on boil. The dyno came out 258wtq/338whp which is roughly equivalent to 300tq/400hp at the crank.

At the 7200rpm redline that was set, the Rotrex only pushes 10psi. AFR is very conservative. The shop said the car cools down very well, and the air to air charge cooler is solid. 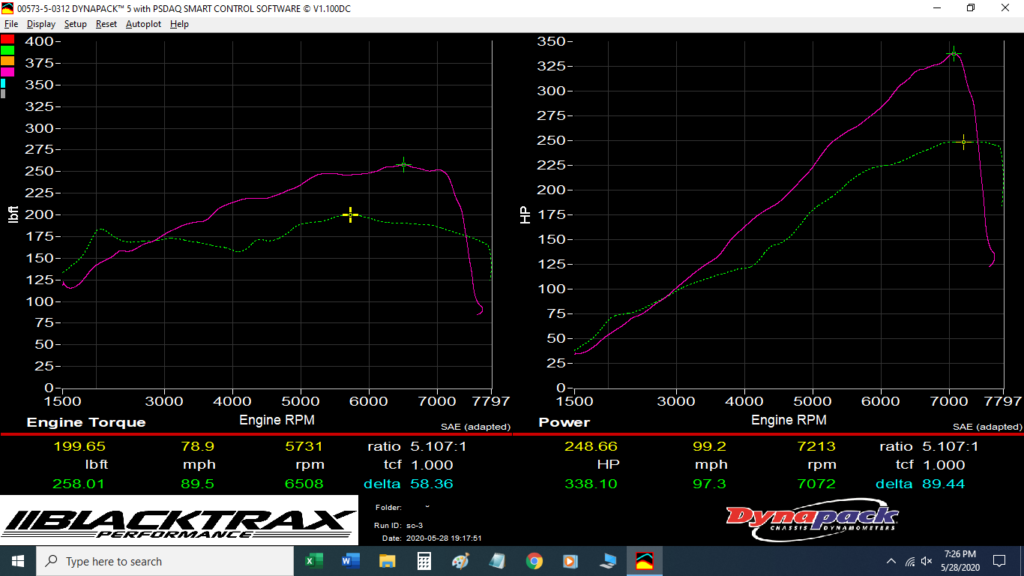 It turns out the combination of silicon hoses to clear the tray and the apparently restrictive Jim Wolf Filter was collapsing the hoses on the intake. Shop revised the intake system by reducing the use of hoses and adding an even larger filter element and raised the rev limiter back to 8000 rpm. 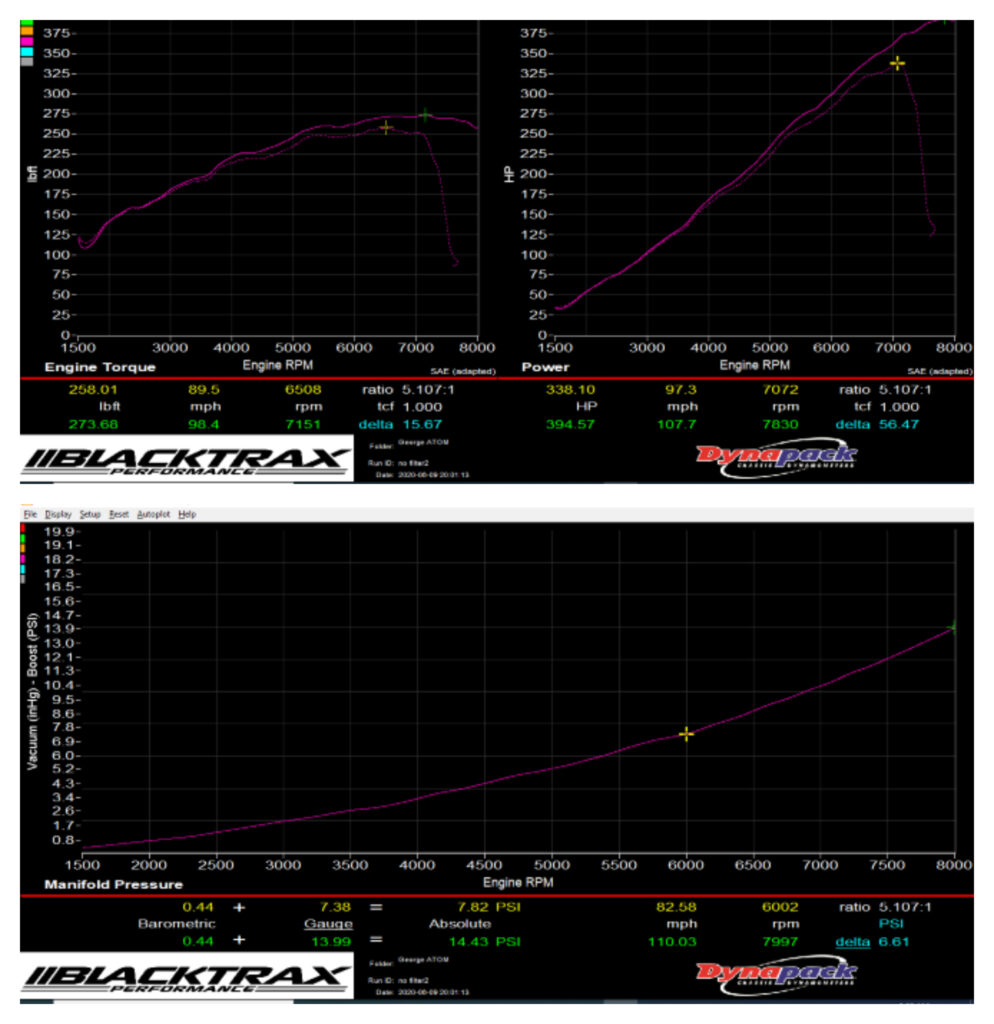 Question: Can you explain the silicone hoses, what was the problem here?

Answer: As the supercharger tried to draw air from the atmosphere, the silicon hoses collapsed shut. Imagine a plastic straw pressed shut with your fingers.

The lesson here is to try to use as few of those couplers as possible, they are weak unlike the aluminum pipe and can shut off the airflow. So what we did now is to cut the engine tray to have a simpler intake that is 99% aluminum tubing. We also replaced the filter with an enormous one.

Got some much needed R&R, i.e. Ran the Rotrex! Seven months of not driving made for some questionable driving moves, but the boost made up for it in shoves. Pinched a 1:32.2.

The Atom killed it with the quickest time of the day. It even slotted favorably in the top third of the qualifying times set by Trans Am series that shared the track that day. Trans Am now includes the likes of 600hp AMG GTR GT3s.

Have a story to tell?