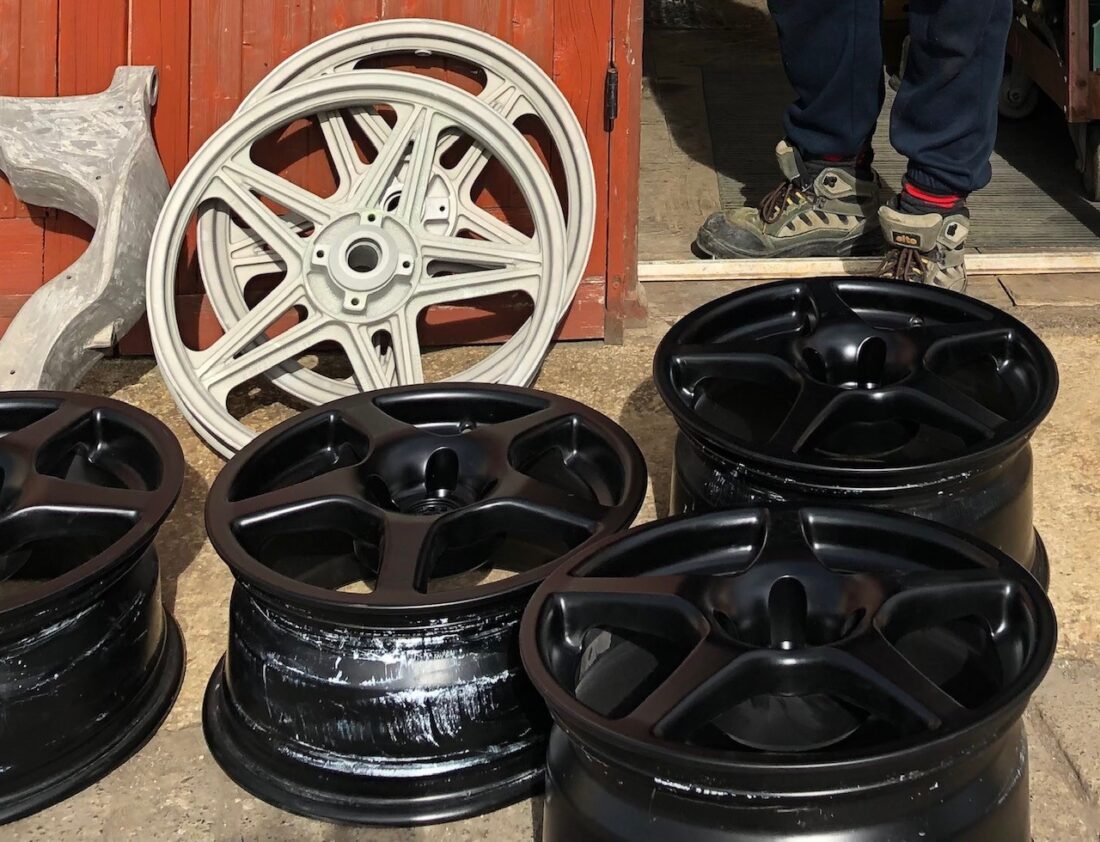 Light cars, are as we know, sexy. They are sexy because they go, stop and handle better than heavy cars and accelerative motion is what we hairless apes crave. We use the pursuit of lightness to justify expensive carbon fibre goodies, the fact that they look cool is just a happy coincidence.

This obsession for lightness can be seen in the quality components that Ariel have made available, either as standard or as options, for their vehicles over the years. An example being the Atom 4’s Carbon Fibre wheels that are currently available. They look amazing, but they also reduce both unsprung weight and rotational mass.

Less unsprung weight, as we know, means the chassis components of the car or bike have to less work to do. Rotational mass is a complex beast (for a mere marketing bod like me) but crudely; force, torque, mass, moment of inertia, linear and angular acceleration all conspire to make each kilo of spinning mass approximately 3 times harder to control than each kilo of non spinning mass on your vehicle. Sort of.

Anyway, for those of us not in a shiny new 4, Ariel used to offer DYMAGS as a cost option.

Founded as Competition Wheels in the 1970’s, this firm of specialists perfected the dark arts of Gravity Diecast Magnesium wheel manufacture and went on to provide the round things underneath most F1, MotoGP and Superbikes teams until 2009.

A chap called Steve Turner used to work there as a wheel builder, he’s the titular ‘Dymag Steve’ of this article and owner of TPCS today.

Magnesium wheels are clearly expensive bits of kit, because the financial crash of 2009 saw the demise of DYMAG. It was reborn as CSA Performance, who eventually became Dymag Group Limited in 2014. If you are lucky enough to have a set of Dymags, you can tell which era they hark from by looking for a 6 digit serial number stamped either on the inside of the rim or backside of a spoke. Steve tells me that the format is year followed by a sequential production number – 09299 denotes the 299th wheel made in 2009. If your set carries this mark they likely are pre-2009. Another trait of the pre-2009 wheels is that the paint coverage is generally thinner as the finish to the metal has much more refined than in later years.

Why am I sharing this with you? Well, as I carry on the work to upgrade my 2018 3.5 to a full 3.5R, I was offered a set of Ariel Dymags by a fellow member of the club. Buying safety critical items second hand is always a risk, especially as I plan to use these wheels on track. That I trusted the seller (thanks Tommy) was one thing, but trusting brittle hoops of magnesium as I enter Quarry in anger, was another thing.

Another club member, this time our very own IanG, recommended TCPS and the incredibly knowledgeable and friendly Steve. It’s fair to say he is the world’s leading expert in refurbishing Dymags. Customers have been know to fly in with a wheel in their hand luggage just so he can work his magic. In fact there is another renowned magnesium refurb specialist in Kent, but they send their wheels to Steve.

When I dropped off my 4 wheels, Steve was hard at, it spraying a magnesium motorbike frame. Inside his workshop are piles of alloys from Aston Martin race cars, classic Ferraris and bikes and a whole lot more. In fact the bike wheels you can see in the picture above are about to make their owner very sad indeed, as Steve’s forensic examination of them has revealed two cracks in the magnesium.

And that is the risk in taking something as rare and expensive as magnesium wheels to someone like Steve. He will do a proper job. If they are not right, he will tell you. A risk it may be, but I would not want it any other way. So now the 3 week process of stripping, examining and hopefully resealing and spraying them begins. Steve will keep me updated and I’ll share progress with you here. I have many things crossed.